Last week I learned a very valuable lesson; for the first time I loaned my big SDS drill; brand new 40M extension reel and sledge hammer to two builders repairing the adjoining wall in our rear garden the wall belonging to excellent neighbours. I couldn't believe what I saw; they were using club hammer and cold chisel to break through the rock hard mortar joints; when I asked why go through the joints when the soft blocks are much easier I was told it's because the full sized blocks are easier to handle than blocks broken into small pieces; during breakfast we could hear the chisel being pounded.

After breakfast I donned my waterproofs and headed up the mountain in torrential rain to where they were still working. The weather was absolutely dire; I took pity on them and offered the use of my kit which was gratefully accepted so I ran the extension from our exterior socket and now they were using the SDS I returned indoors to dry off.

After dinner the wall section was down and my kit was returned; it was in filthy wet condition and they'd broken the sledge hammer shaft but would replace it. I spent a couple of hours drying and cleaning my kit; 40M of extension cable takes a lot of drying with a rag soaked in WD40. The SDS too was dried and cleaned but I removed the gearbox grease cover and only just in time it was almost dry of grease so I topped it up with LM grease then put the now clean drill and bits away.

The following morning the monsoon was still with us; as promised I received a new sledge hammer shaft. Later as I looked out of our kitchen window I became very distressed to see these two unloading materials directly under the new mesh fencing that had almost flattened me to erect; I'd spent three months of hard graft sorting the fence out firstly having to remove a huge hedge together with stumps; I spread 5 tons of wood chip mulch; 2 tons directly under the fence and everything looked perfect; I really could have cried to see a lot of my hard work ruined but what was the point of being awkward; the rain was bucketing down and the mulch turned to mud as did the path they were treading.

They finished the job after dinner and as they departed out came the sun; I wandered up to survey the damage but in fairness to them they had done the best job they could under the conditions to leave it tidy and take away their debris. I've since made good the damage but I confess after all the hard graft I'd put in it sure upset me.

Never again will I loan kit out; this was the first time and will be the last time.

My chum David emailed me last night with a motto to live by; DIY = DON'T INVOLVE YOURSELF 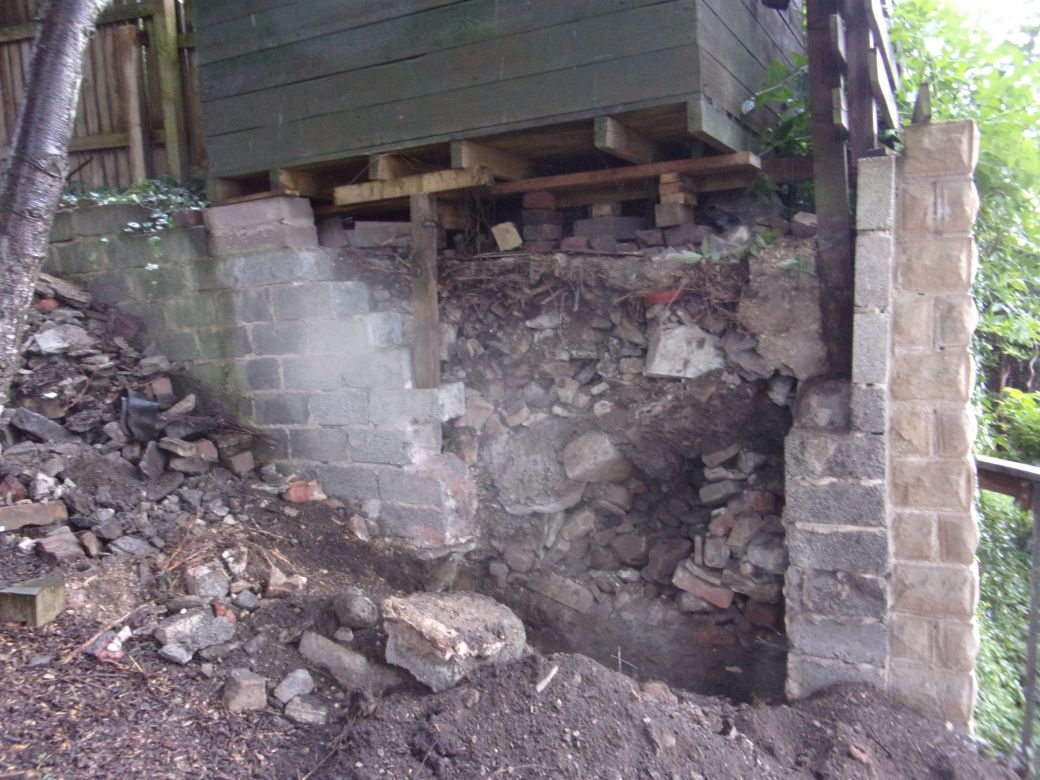 When the builders first arrived to inspect the job I joined them virus protected wearing face mask whilst keeping the safe distance; they said to our neighbour the hut will need moving the hut end sitting on the wall top; I suggested just lift the hut clear of the wall and they agreed it's a good idea; I then suggested a fence post under the hut joists would give support but this was immediately rejected they saying a fence post won't be strong enough; they'll use scaffolding? I received a phone call asking if it would be OK to start work because the builders were suddenly available so the builders arrived to check what they would need; like an idiot I offered to lift the hut clear of the wall which our neighbour was delighted with saving quite a bit of time and money. When they all departed I only took a few minutes to lift the hut onto four support piers using a trolley jack and small bottle jack; after my initial suggestion had been declined I now lifted the hut with so much ease I could have used one finger and not a bit of scaffolding in sight? The difference between a builder and a mechanical engineer? The picture shows the section of wall removed; our former neighbours who built the house at the top of their garden skimped on everything to the point this wall didn't have a foundation and it's a retaining wall. 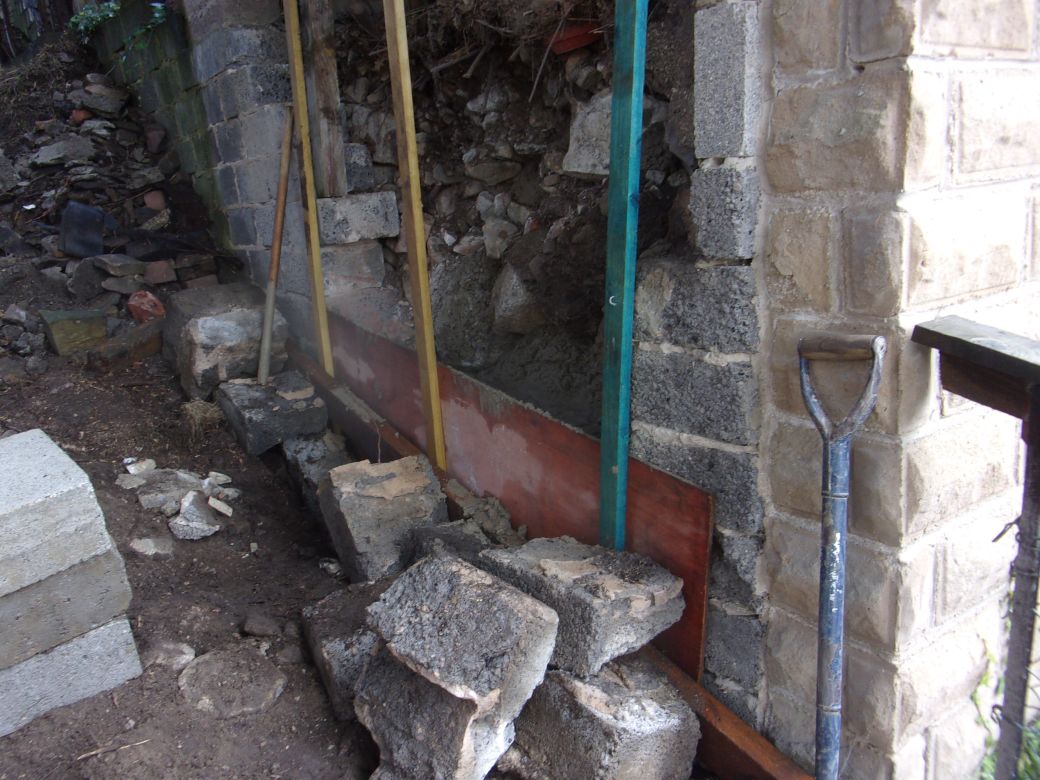 Full marks to the builders for adding substantial concrete foundation; here the concrete has just been poured. 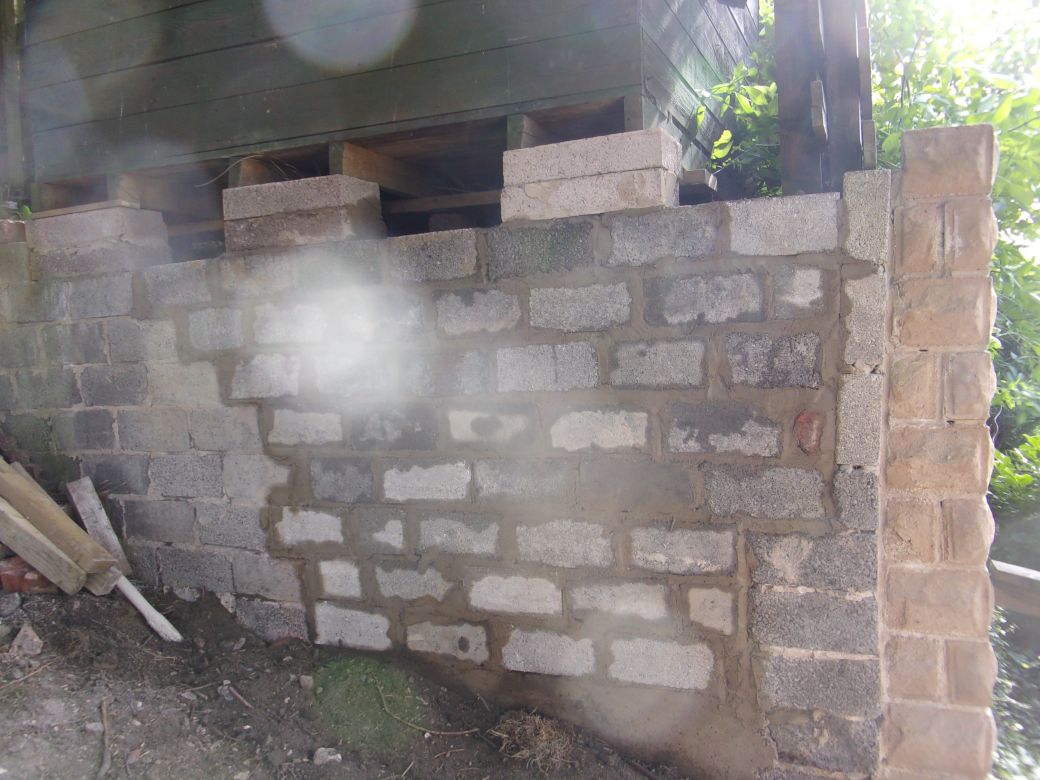 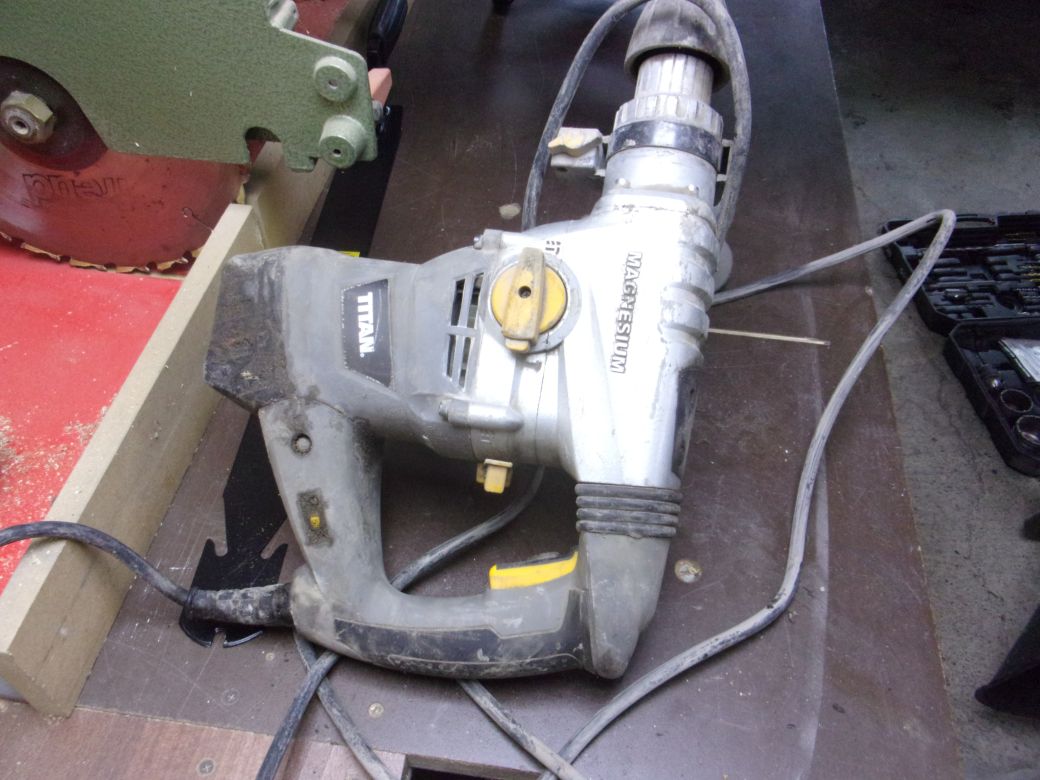 I'll never loan another bit of my kit out; I look after it; yes it was bucketing down with rain but no excuse to return a favour like this. 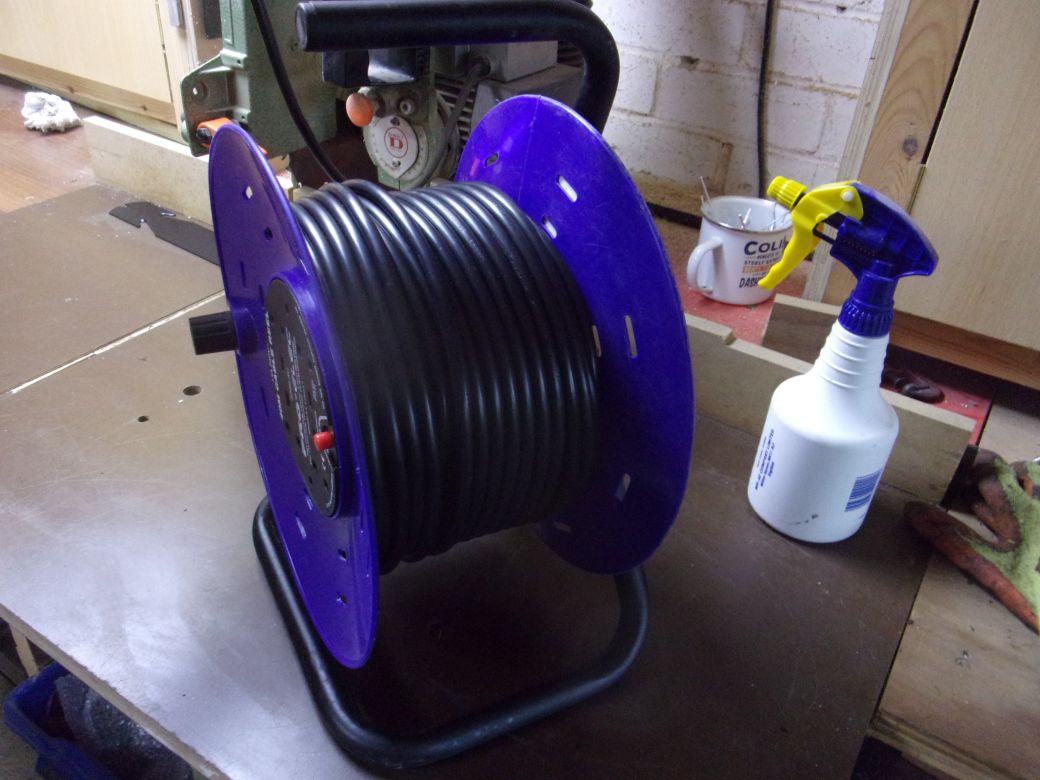 My brand new 40M extension cable after drying and cleaning which took ages. 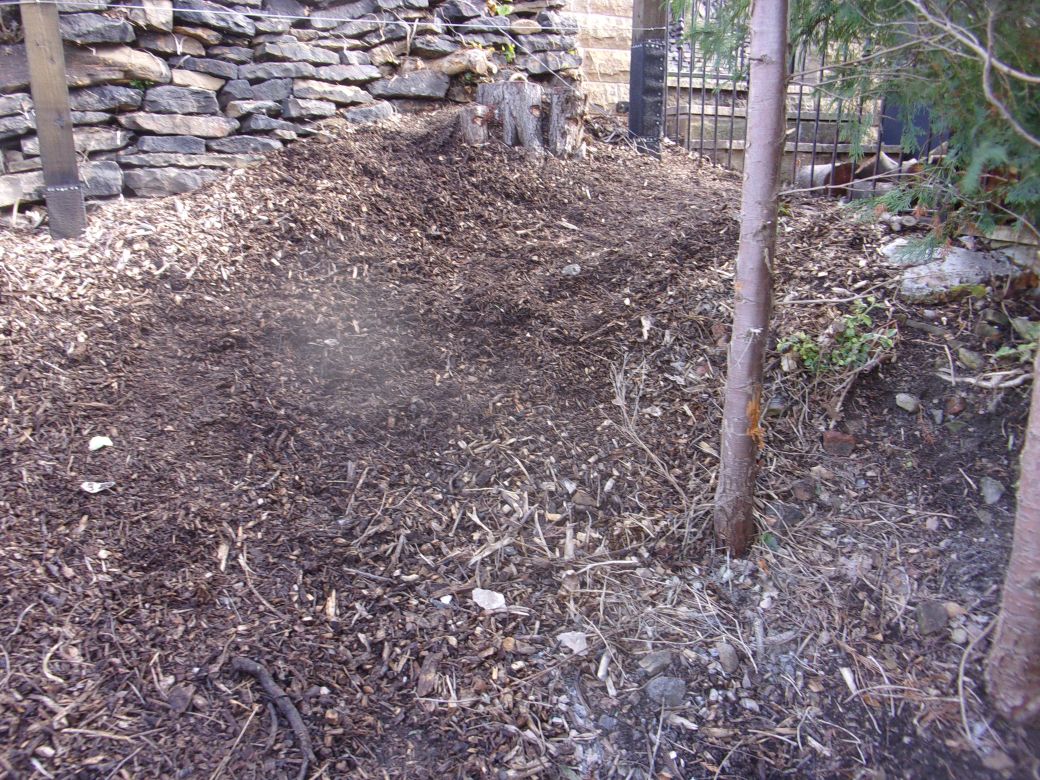 Looking at this it distressed me after I'd put my heart and soul into the work I carried out over three tremendously hard months. 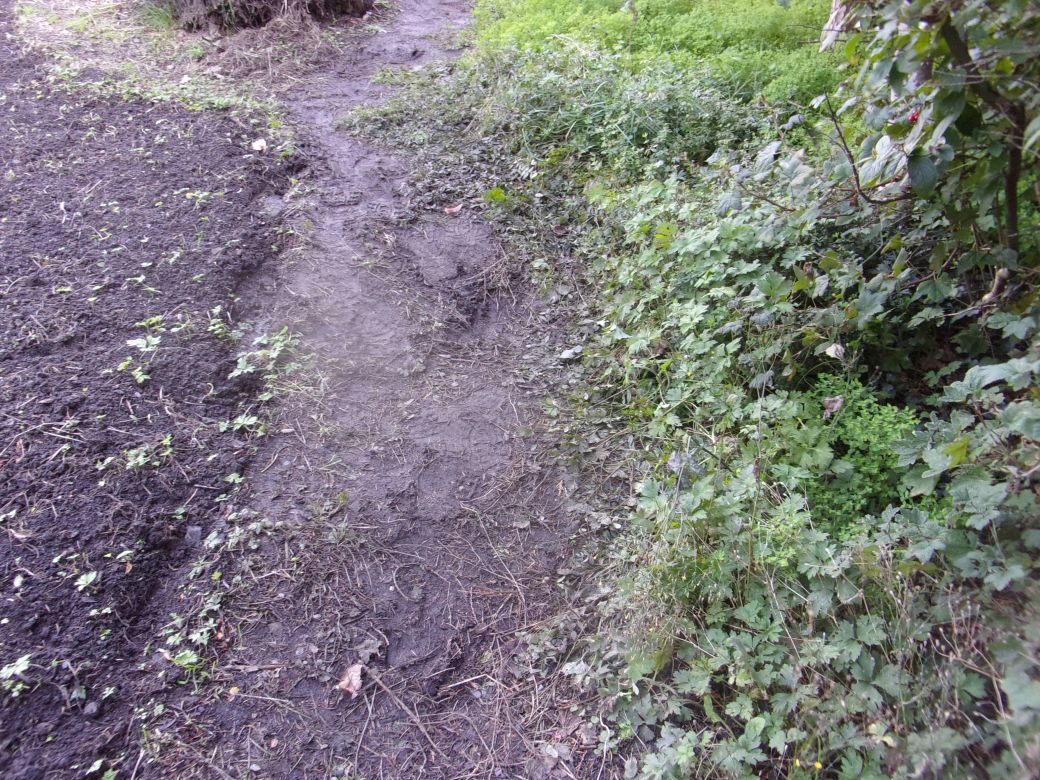 No I didn't want a muddy path but I got one. For half a century I've grafted in some terrible jobs but having this done to my hard work really did get through to me. The neighbours have a perfectly decent flagged pathway with steps and I had suggested a fence panel be removed near the hut; this damage had already been done before I saw them carrying materials down our garden.
Ad

I'm very particular to what I'll loan out.
It's limited to my big slow turning Wolf drill which takes a 1" masonary bit. Hard for anyone to ruin that.

I NEVER loan out any of my tools, even to family. If the job is portable and can be brought to me, then I will supervise their use or do the job myself for them. Family understand and accept that. Others vary in their response.

Your Wolf drill reminds me of my very first drill Doghouse. My late grandmother used to run a catalogue where goods could be bought with repayments spread over 20 weeks; I used my pocket money to buy a Wolf Cubmaster drill it being single speed with a small chuck but I treasured this drill for years; this was near 1950 and I've long forgotten what happened to the drill; I remember it had a lovely smell and was a solid bit of kit. I've still got a B&D single speed drill bought over 40 years ago and it still works.


This was my first time loaning kit out Colin and will be my last; a lesson learned the hard way; like you I've always done the job as a favour but using my own kit and my own time; something else I've learned; don't be a mug doing favours any longer it gets me nowhere; when I do jobs I break big jobs into smaller jobs allowing me to complete the job on my own because in spite of the many favours I've carried out over the years if I ever needed help it wasn't available. I've always been friendly and helpful but I've come to realize being like this is taken as a sign of weakness. In future I'll be deaf.

This is my Wolf drill. I last used it last year when we closed down the koi pool. I needed to drill holes through the concrete screed base to allow rain water to pass through it after the pool had been filled with hardcore and paved over.
You have to keep your legs clear of the handles as if the bit jams there's no way you can stop the body turning until you take your finger off the power button. I used one of the big wolf drills as an apprentice in the pit; I was standing drilling a big hole in steel plate and found out the hard way as you say Doghouse; there's no stopping one of these unless the trigger is released; I was wearing safety hobnailed boots and spun around like a top until the plug pulled clear of the socket otherwise I'd be still spinning.

I'm sure every engineering company in those long ago days had at least one of these drills. 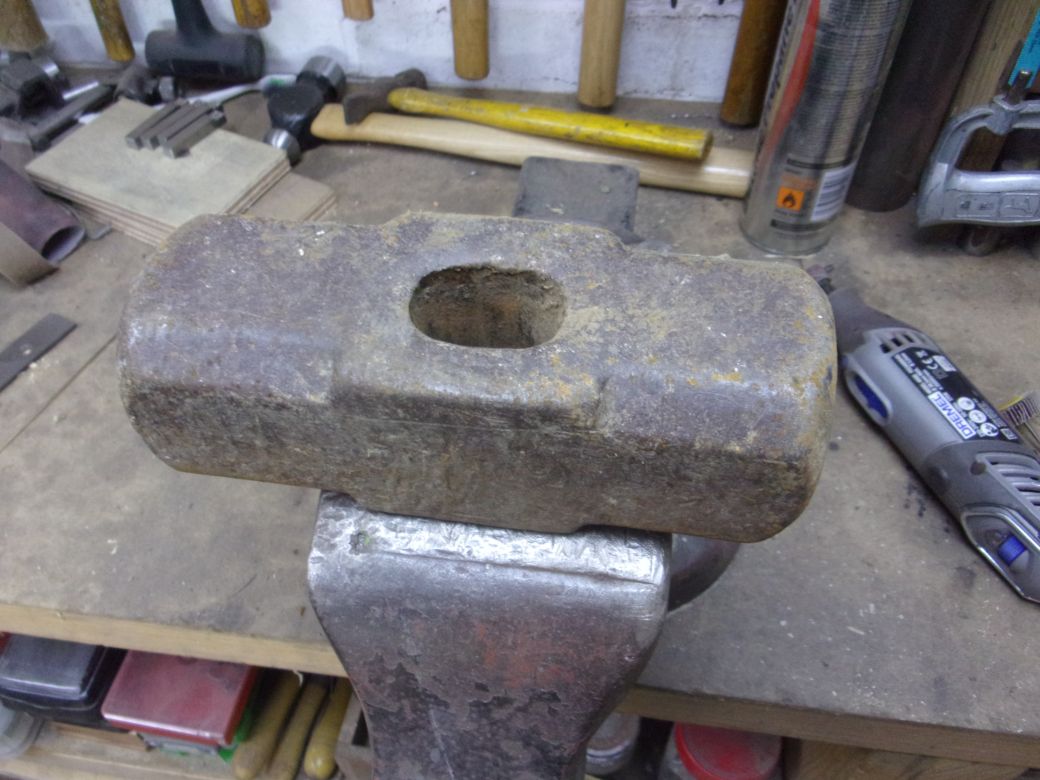 Here's the sledge hammer head looking sorry for itself. 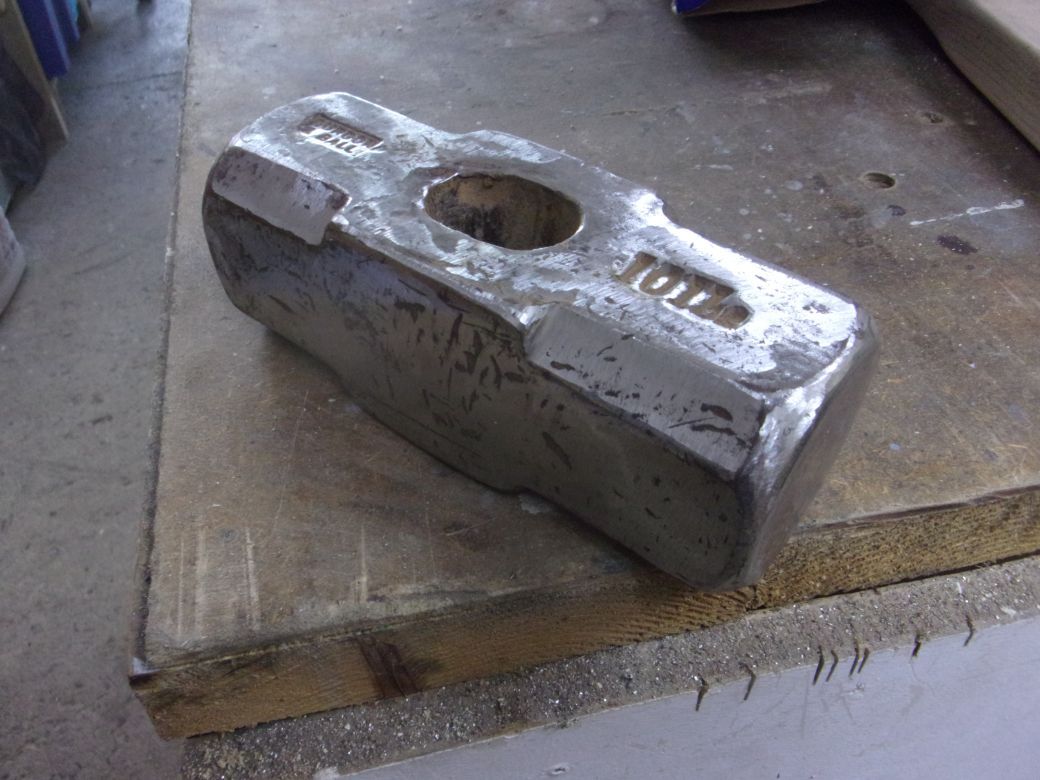 Looking better and ready for the shaft being fitted. 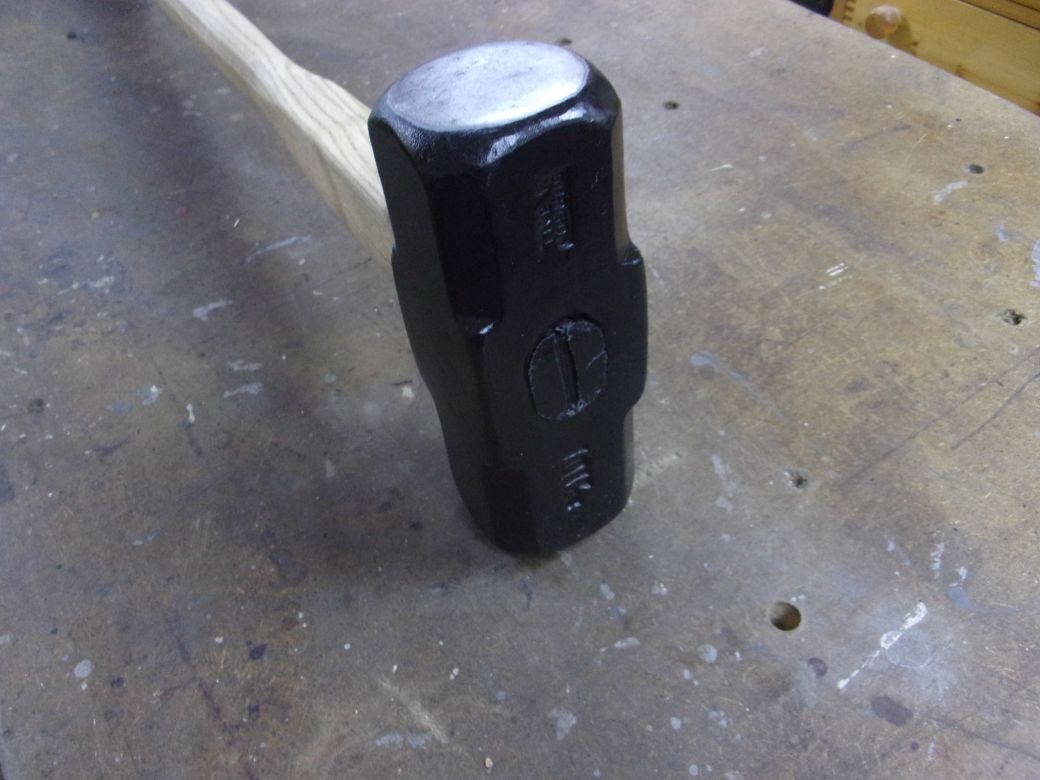 A blast of rattle can primer then black gloss makes a lot of difference. 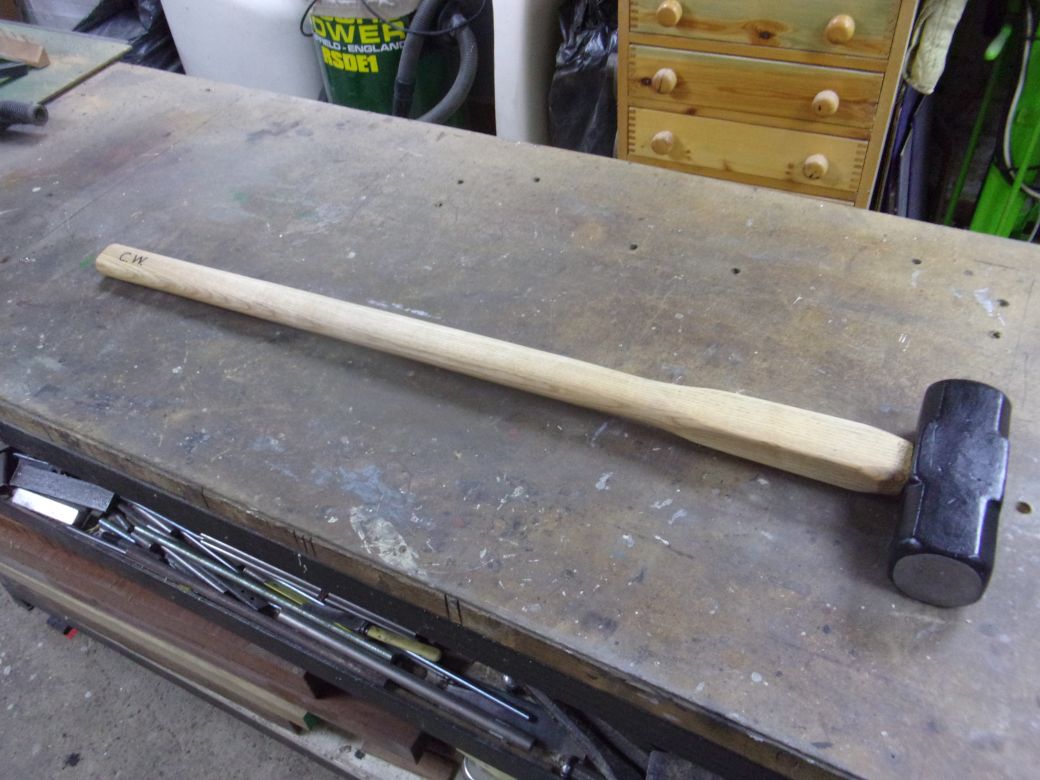 It's a shame to use it now; the shaft's been given a heavy coat of raw linseed oil. 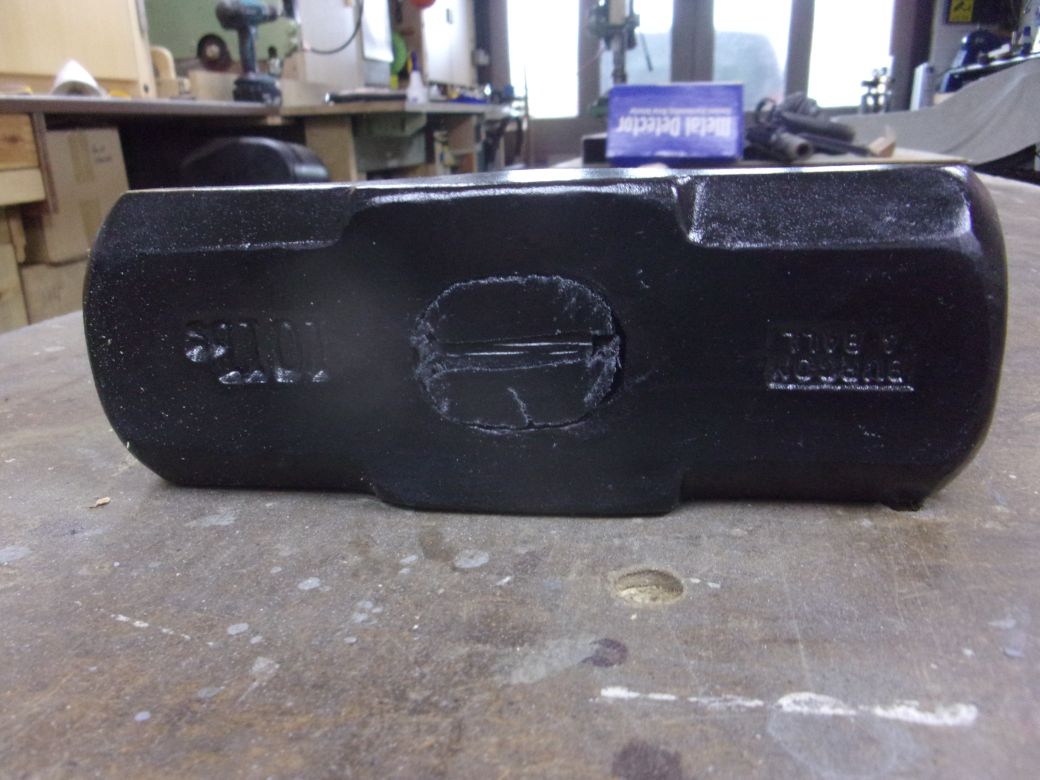 I made a long heavy duty steel wedge; the head was installed by banging the end of the shaft onto the workshop concrete floor to fully seat it until it wouldn't go on any further then the wedge inserted and pounded home with a club hammer; a cold chisel drove the wedge in a bit deeper; this head won't come off in a hurry. It's a 10Lb size. I didn't expect doing this job but I'm pleased its now like new and absolutely no way will I ever loan it out again.
Ad

Yo #1 - not sure I'd say nevereverever, but short of that yeah, never lend your tools out. Except you know that if you borrowed one you'd treat it with respect, you'd return it in at least as good a condition as you got it, and if it used any consumables you'd give the owner anything part-used which you bought. So where does that leave us?

Yo #2 - auto-rotating drill operatives. You may not get the operarting system analogy, but I think you'll enjoy the story of the Hole Hawg

Q. #1 - I need a new shaft for my sledgehammer. Wood or fibreglass, and why?
You must log in or register to reply here.