One for you Ian and just for interest. I have lots of security on my computer and this many times blocks logging on to sites; 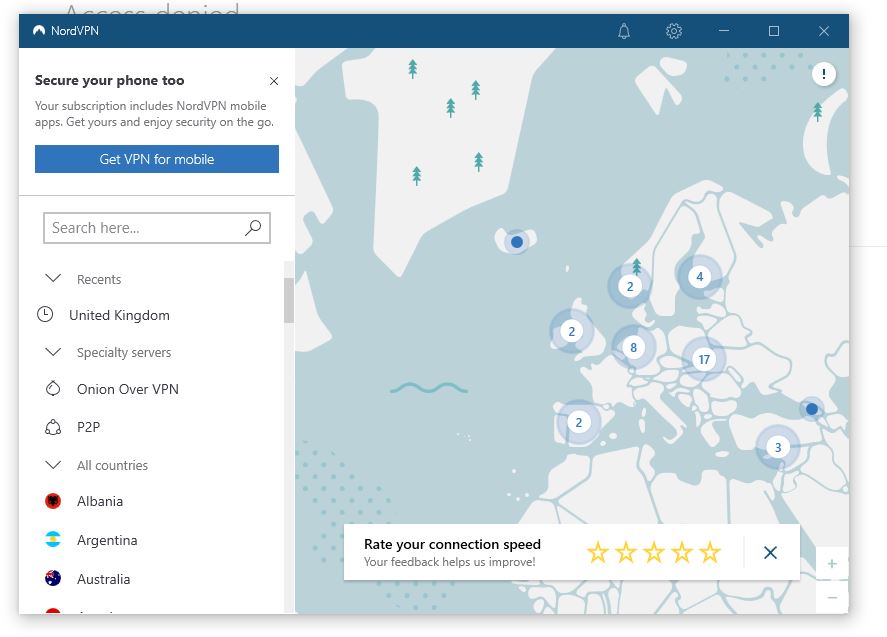 Above is an example of an error message I often receive; my bank; PayPal and eBay also lock me out until I receive a phone call with a code; I actually don't mind because better safe than sorry on the Internet.

When I disable NordVPN then I've no trouble logging onto the forum.

No one is absolutely safe whilst online.

Many site owners don't like VPNs because you could be logging on from anywhere rather than a specific territory they service. Banks, PayPal and ebay need to know you are in the UK to serve you with the correct pages and info. I have never found the need to use a VPN but rather depend on the security measures offered by my bank, Paypal and ebay.

Many thanks ColinA; yes I understand the problems caused by using a VPN and I'm not complaining. I used Google Chrome for a long time thinking it excellent but a couple of years ago our bank account was hacked; fortunately I check the account daily so found two unauthorized transactions whilst still "pending" amounting to almost £1,000; I immediately contacted the bank who sorted it out and the money never left our account but since then I've become increasingly worried as to online security;


I now use Firefox/DuckDuckGo which I can use without issues but for extra security I use "Tor" browser and also have the NordVPN running in the back ground; in order to securely delete data from my computer I use CyberScrub Privacy Suite,

I'm not rich but why make it easy for any hacker; I don't trust Google and now Microsoft has invaded my computer with Microsoft News; I didn't want this and now it's difficult to get rid of; I can better spend my time elsewhere than fighting off all these invaders. I've disabled NordVPN allowing me to access YouTube. I don't like browsers saving history; Virgin Media have private browsing but it's not really private because Virgin and others can still see sites I visit hence I've gone to a lot of trouble and some expense.

Using NordVPN and sitting here I can be just about anywhere in the world hence as you say ColinA not being in the UK does mess with banks and PayPal etc.

I'm definitely not a computer geek just trying to look after my online activities not wanting to be spied upon at every keystroke.

Thanks for the info Colin, I can see what's happening now - it's Cloudflare blocking access, as that's the first layer of security we use. 99% of spam and malicious use we see on the site comes from people using VPNs (as it's impossible, or at least hard, to identify and block them individually using those). I've got security settings set to "low" for cloudflare, which means that it'll block only the most commonly abused VPN access points.

It'll anonymise what you do online, but it will mean you'll run in to quite a lot of access problems unfortunately . I don't know of I way I can loosen the restrictions selectively, as the security happens before you even get on to this site. I wonder if choosing a less common UK VPN location for the VPN connection would do the trick for you?

To be honest, I don't know if VPNs will actually add that much of a layer of security - as most sites have migrated to using SSL in the past 3 years. Previously it was only for banks, etc... but now almost every site uses this (including this forum).

I'll have a think and do some research to see if there's a way I can make this a bit easier for you to access here!
Ad

Many thanks Ian for your interesting and informative reply. Please don't go to any time and trouble regarding what is really my problem of my own making.

It brought it home to me just how vulnerable we can be whilst online; when our bank account was hacked then no one is fully safe and this is why I put up with the inconvenience of being blocked from certain sites I use; I've disabled my VPN at the moment so no problem at all logging onto the forum. I've also got ad blocker activated which is brilliant; I used to get fed up of all the adds but now Cookies have taken over. On a number of sites I end up playing computer games like select which pictures have fire hydrants; busses; cars; bridges; crossings etc; the pictures are small and poor quality; I recently had one of these when I wanted to order butyl tape but became so fed up I just copied their email address and contacted them directly through the email. Everything in life these days seems to get more complicated; fine for four year old wiz kids with mobile phone welded to their ear but not me a 73 year old dinosaur who struggles using the TV remote.

Thanks again Ian; much appreciated. I'm heading into the workshop today to hide from the world in peace.