We’ve been renovating a house and, trying to do too many things at once, I have ordered eyelet headed curtains for a bay window. I have managed to find ONE product that claims it is suitable for this, however it only comes with brackets suitable for wall fixing. The UPVC windows go right up to the top of the wall so their is no plasterboard to drill into and I’m guessing we therefore need a ceiling fix solution. Do you think it would work if I ordered the pole suitable for eyelet curtains and fixed it with generic ceiling fix brackets? My other concern is whether a ceiling will take the weight of the curtains (they’re linen with standard lining so not super-heavy) 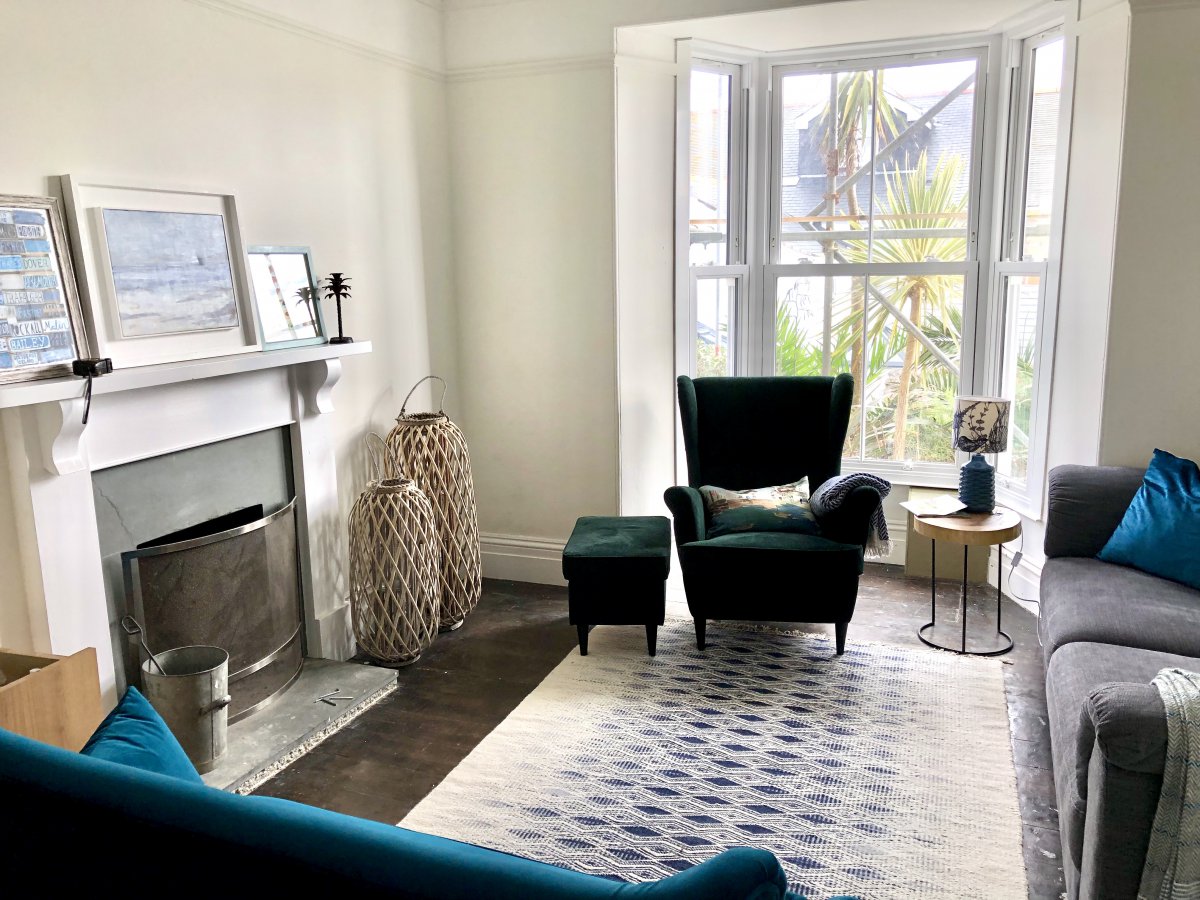 . I’m attaching a photo to show the window in question.
Ad

What you have to consider, is not just the weight of the curtains, but the extra weight of you tugging at them to open or close them.
A plasterboard fixing, in my opinion would not be up to that.
If it were my house, I would have a full length pole suspended by two brackets on the walls either side of the bay about nine inches above the picture rail and about 18 inches apart. The walls would be able to take the weight and It would also be possible to draw the curtains completely away from the windows, allowing the maximum amount of light to enter the room during the day.

Alternatively, if your curtains are only the size of the width of the bay, find some fixing that you can screw to the ends of the walls, that form the aperture just above the picture rail.
Last edited: Sep 6, 2019
M

Thanks for your reply. I think what you are suggesting is a straight pole, not one that follows the shape of the bay? This is what we have done in the room above, however we don’t want to do that downstairs as it would mean we can’t use the space in the bay (where the armchair currently sits).

I’m frustrated with myself for ordering curtains with the wrong heading and was hoping there would be some way around it but I guess I might just have to write it off as an expensive mistake .

Mazzarooney said:
Thanks for your reply. I think what you are suggesting is a straight pole, not one that follows the shape of the bay? This is what we have done in the room above, however we don’t want to do that downstairs as it would mean we can’t use the space in the bay (where the armchair currently sits).

I’m frustrated with myself for ordering curtains with the wrong heading and was hoping there would be some way around it but I guess I might just have to write it off as an expensive mistake .
Click to expand...

You did say "pole" so I worked out a solution for one.

You can screw brackets to the PVC window frames. I did. We have a bay window in my "den," (alright...our front room) and our curtains are on a Swish track that follows the bay. Ours was complicated as above the actual window frames it's plasterboard then there's real plaster coving up to the plaster of the ceiling (1960s built house, the original window frames were wooden so the brackets were fixed to them). So the only fixing could be on the PVC window frame and the walls each side of the bay. 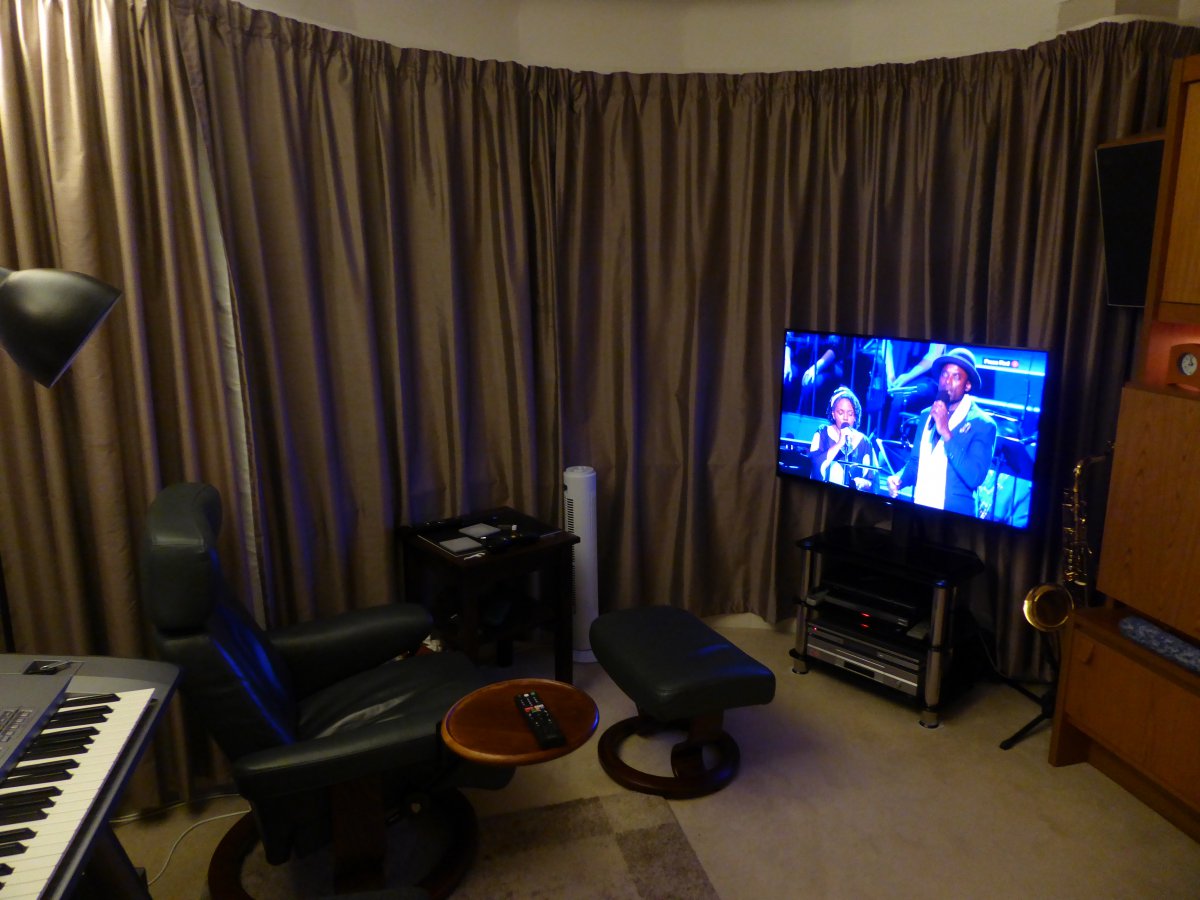 But you have to be careful you don't screw into the glass! Don't attempt to screw brackets to the trim between the window frame and the ceiling, it will only be stuck on with silicone.

Swish used to make plastic brackets, but when I wanted to use a longer track a few years ago, they were no longer available. I used their "L" shaped brackets. One screw is enough to secure them as the track stops them twisting. 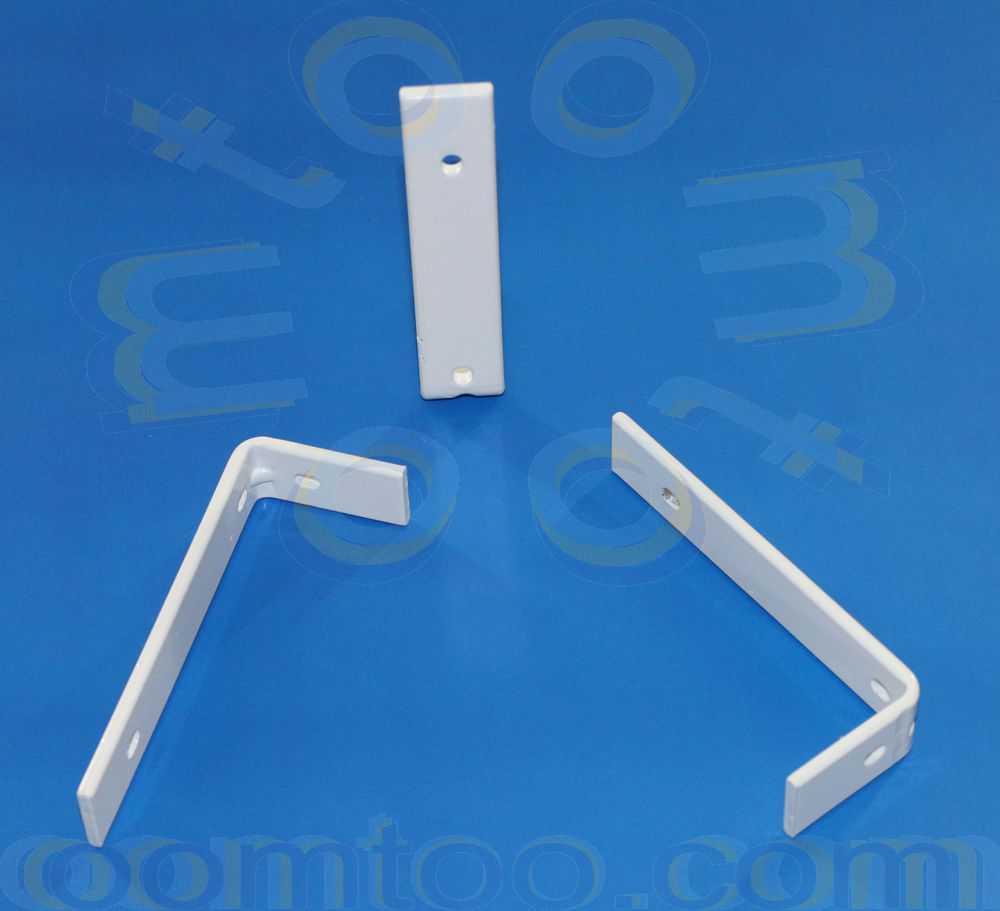 The short side screwed to the PVC and the track connected to the longer side. You've a few inches to play with, depending on how close you want the curtains to the glass the connecting bit slides onto the bracket and is secured with a grub screw.

I used these photos elsewhere as a solution to someone else's problem.

I bent the track to turn round the corners of the bay.

This required it to be bent first outwards and then inwards to navigate the cornesr. You can see how much the track has to bend.
This was achieved by "wafting it" with a hot air gun, as long as you don't let it melt the plastic!
You also have to keep running a curtain "slider" backwards and forwards along the groove as you bend it, to make sure the bend is not to great to allow the slider to turn the corners.
Although there isn't much room, the rail meets the side walls, so we can draw the curtains back much further than shown.. 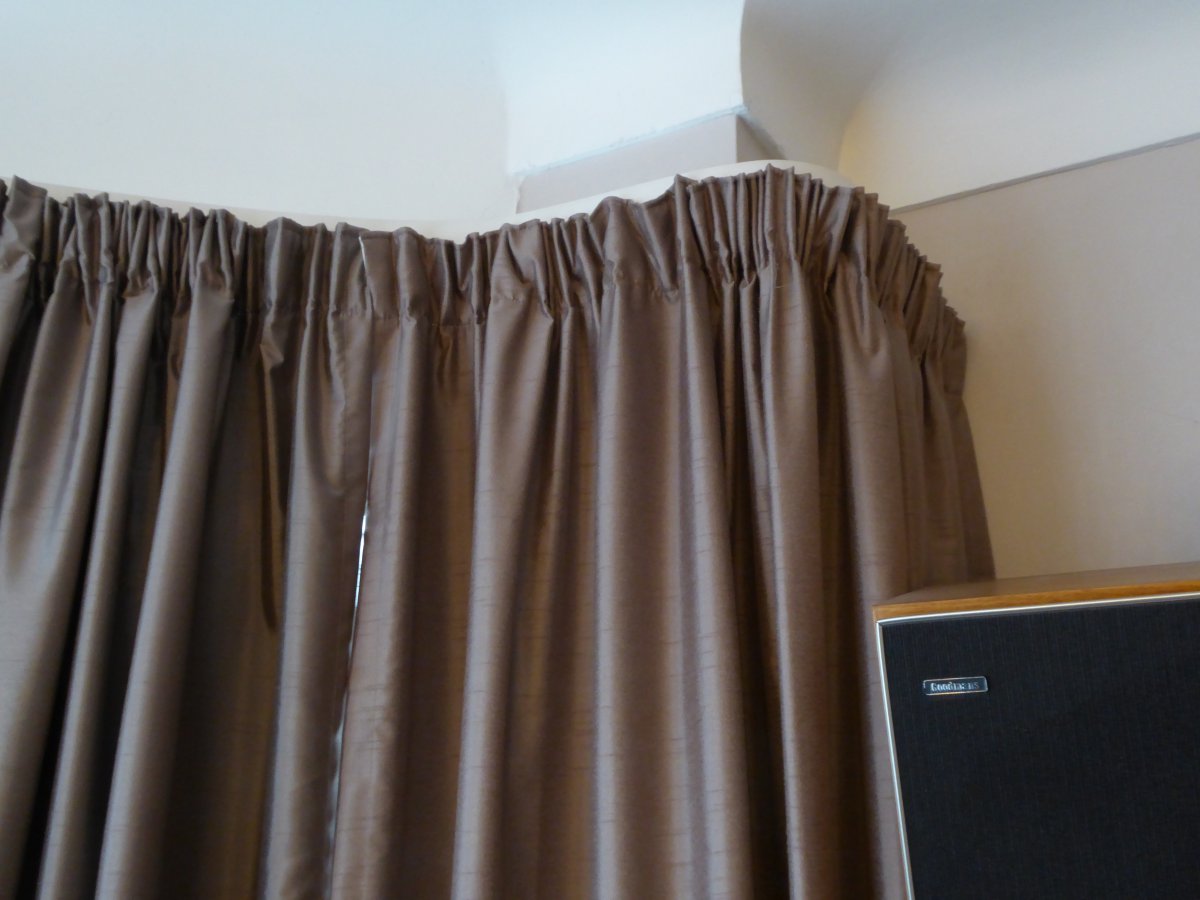 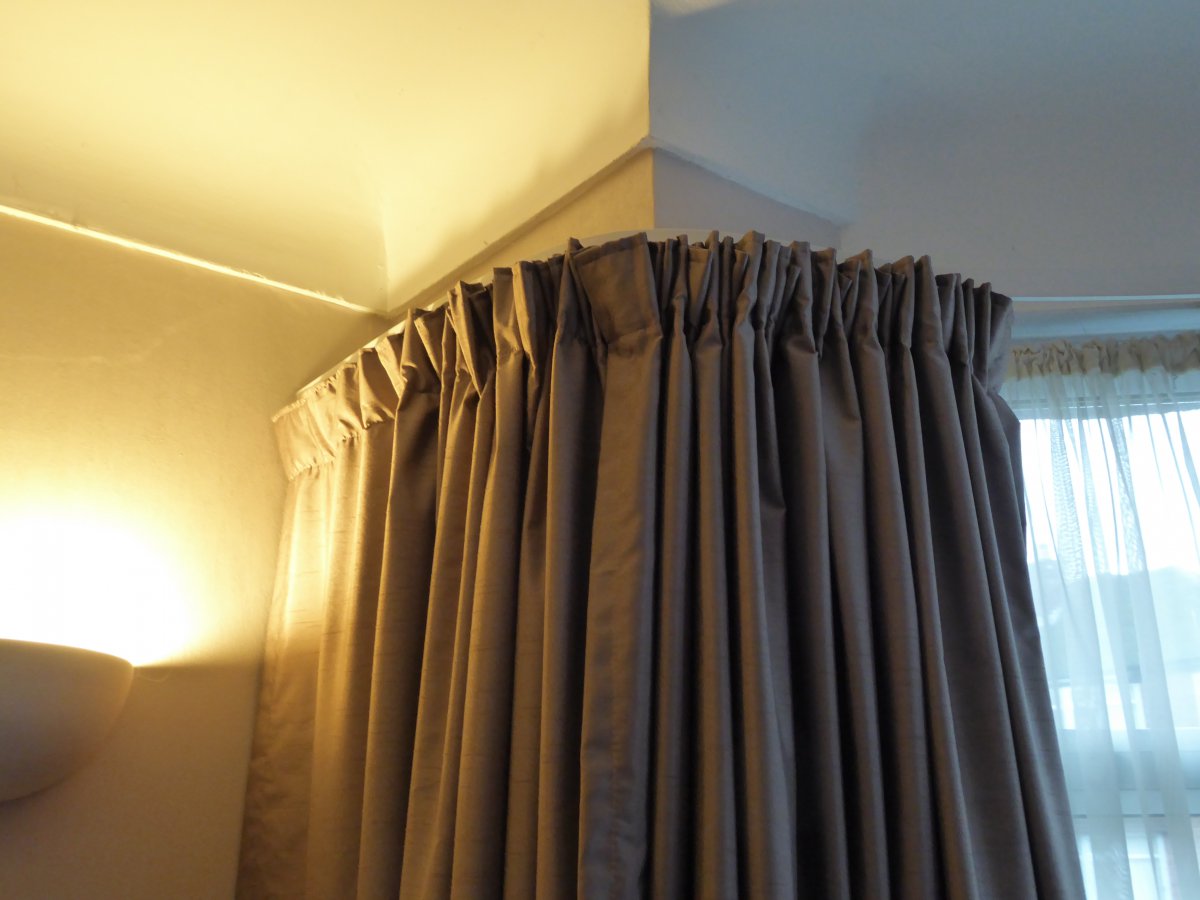 Thank you, I really appreciate your detailed reply and that’s a great solution for pencil pleat curtains but my issue is that I mistakenly ordered them with an eyelet heading so have to have a pole. I was ordering lots of blinds and curtains at once, hence the mistake. The eyelet compatible pole I have found has brackets 4cm in height so I will need to measure when we are at the property next weekend to see if there is sufficient space above the window to fix the brackets otherwise I’m probably going to have to start from scratch unfortunately.
You must log in or register to reply here.