Just a quick message to anyone seeking ground cover that will grow just about anywhere.

Cerastium (Snow in summer) is amazing; 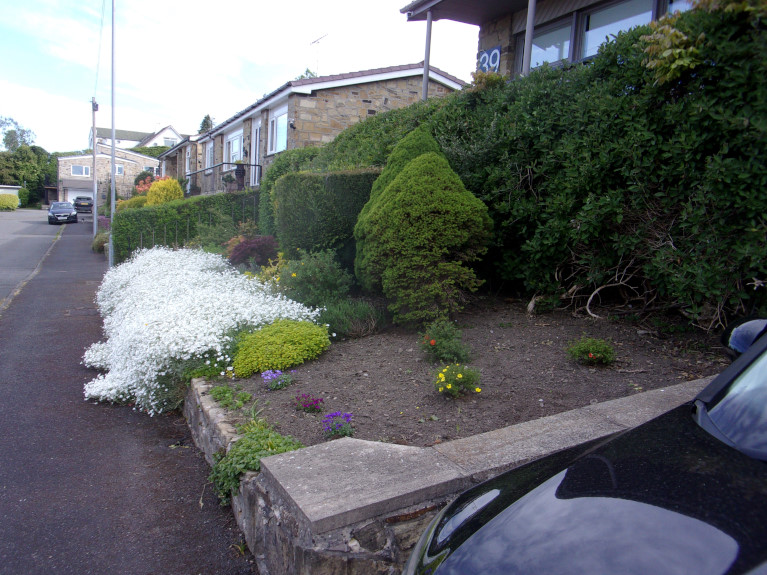 Cerastium in full bloom picture taken today; our front garden. Potentilla shrubs and Aubretia planted where I removed a large conifer together with its stum and roots; once these take hold it should look pretty and didn't cost much; it took about ten years of f my life with all the grafting I carried out last year removing a huge hedge at the top of the rear garden and lots of conifers to the front garden but now the gardens are easier to manage. 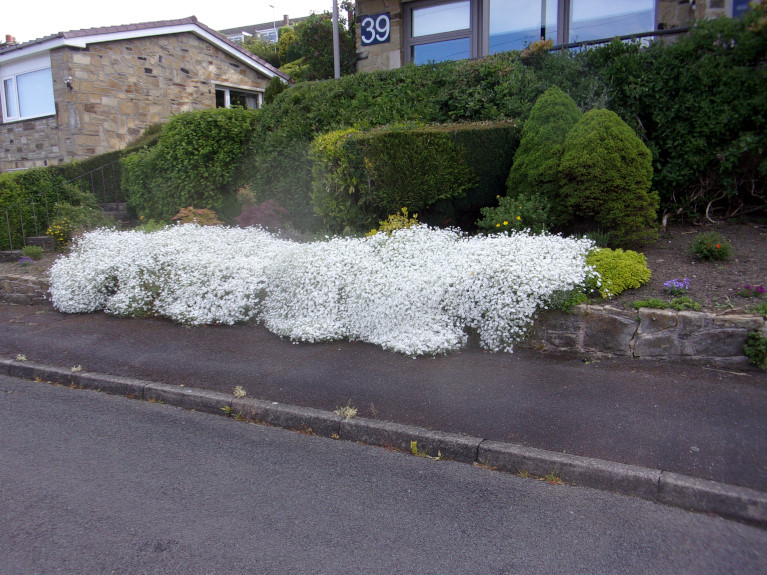 The pictures don't do this justice; it's stunning to see. I bought 18 Cerastium plug plants last year; they put on a nice display but look at them now only a year on. I'll cut them back after flowing. 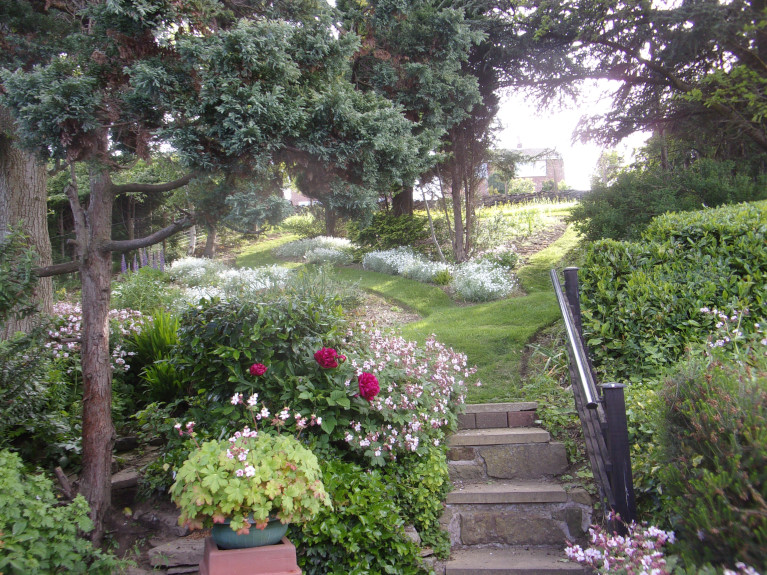 More Cerastium up our rear garden with English Geraniums forefront; at the very top can be seen the wildflower meadow now also coming into bloom.

Here's where I bought my Cerastium and they aren't expensive; it's evergreen so still looks decent all year round. 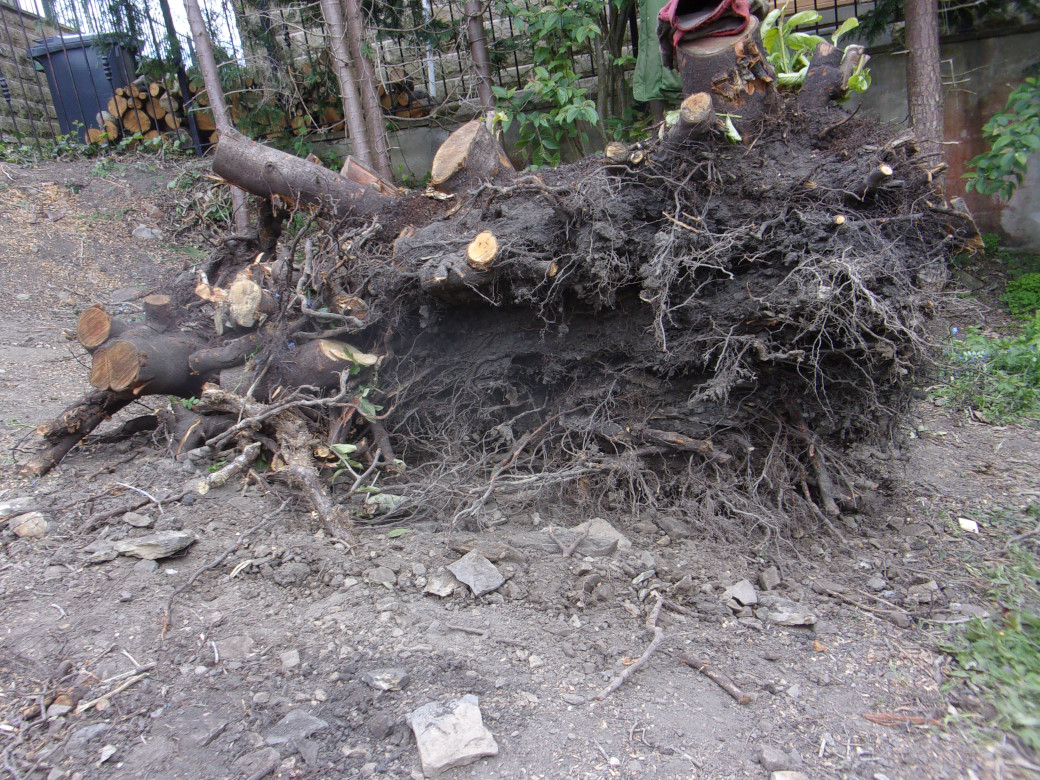 Just one of the stumps I removed the hard way last year; I won't need tall ladders to trim the 60' long huge hedge again.

Oh, I like that! What sort of light levels does Cerastium require? I've got a bare patch in the back garden that I need some ground cover, and we have enough ivy - so this would brighten things up!

Thanks for asking Ian. Cerastium grows anywhere so should be fine in your back garden; details are in Parkers link but here they are; 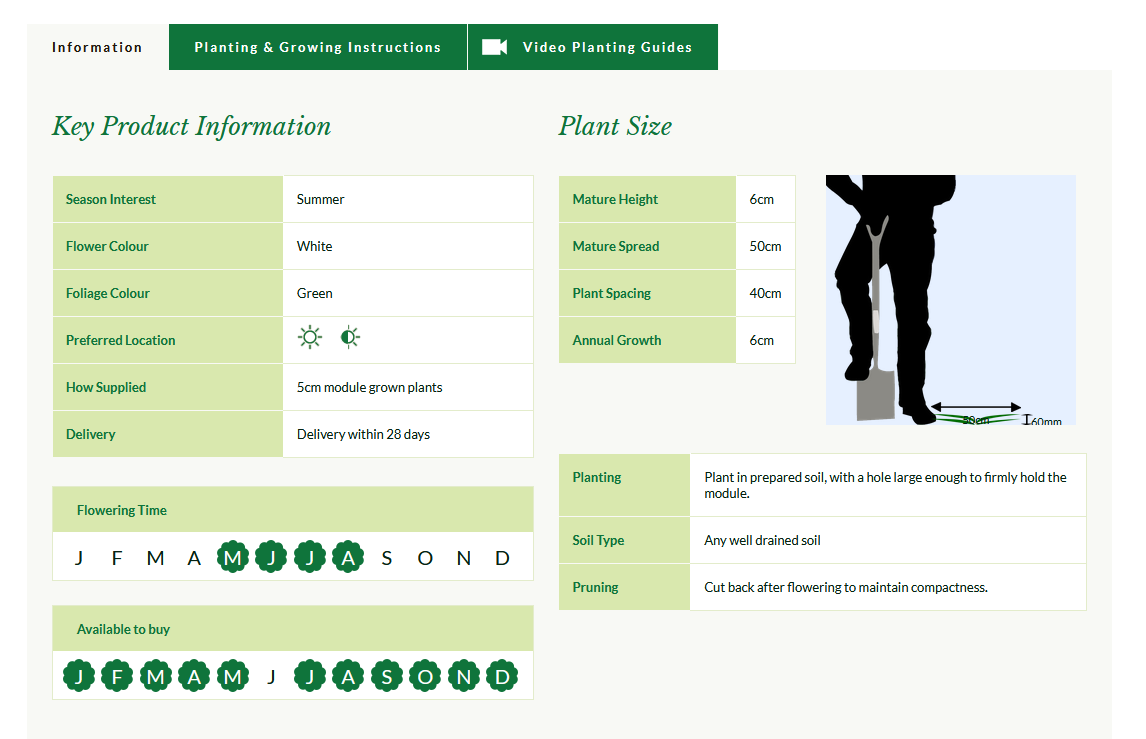 The plug plants from Parker's are cheap so why not try some; I planted ours last year and they put on a decent spread so if you can plant some quickly you too should see flowers this year but hopefully next year will have a display like ours.

To save lots of weeding I also spread five tons of mulch (wood chips) but could do with at least double this; initially I bought two loads but then a tree surgeon was working at the end of the street so I asked him what he did with the chips; he dropped a two ton load onto our driveway completely free of charge glad to get rid of them but I handed him £20 it being well worth it to me; the hard part was moving the load from our front driveway up the mountain to the rear garden.

I am interested in this...thanks for the beautiful pics too

Retired said:
The plug plants from Parker's are cheap so why not try some; I planted ours last year and they put on a decent spread so if you can plant some quickly you too should see flowers this year but hopefully next year will have a display like ours.
Click to expand...

Oh that's perfect - I'll go and pick some up and see how they do! Only a few quid so can't go wrong with that .

I need to order a load of bark too. I need to top the mulch up every couple of years, but it's looking particularly sparse this time round - for some reason, magpies like to re-distribute it around my garden!
K

Related but a wee bit Off Topic?

Up here just now [South west coast of Scotland] all of the Hawthorn bushes in the hedges and, indeed all over the place are in full bloom, nothing near as vibrant or dense as Snow in Summer but non the less impressive. it is remarkable as to just how many there are, must be in the millions?

Went for a drive last week in the sunshine and there were so many plants in blossom that even in the car you could smell the scent from the flowers.

If you just want ground cover regarding the bark Ian may I suggest you listen for tree surgeons working nearby and ask them for a load of mulch/chips which many of them are pleased to get rid of. Last year I bought two loads of mulch from a local company about 3 ton in total costing £110 which I thought fair; shortly after a tree surgeon was working just at the end of the street so I asked him what he did with the mulch; he was only too pleased to drop two tons onto our driveway totally free of charge but I was so pleased I handed him £20 then I can ask again without feeling cheeky. This is freshly cut including chips and shredded leaves so is heavier but it dries out OK and slowly rots down to improve the soil. 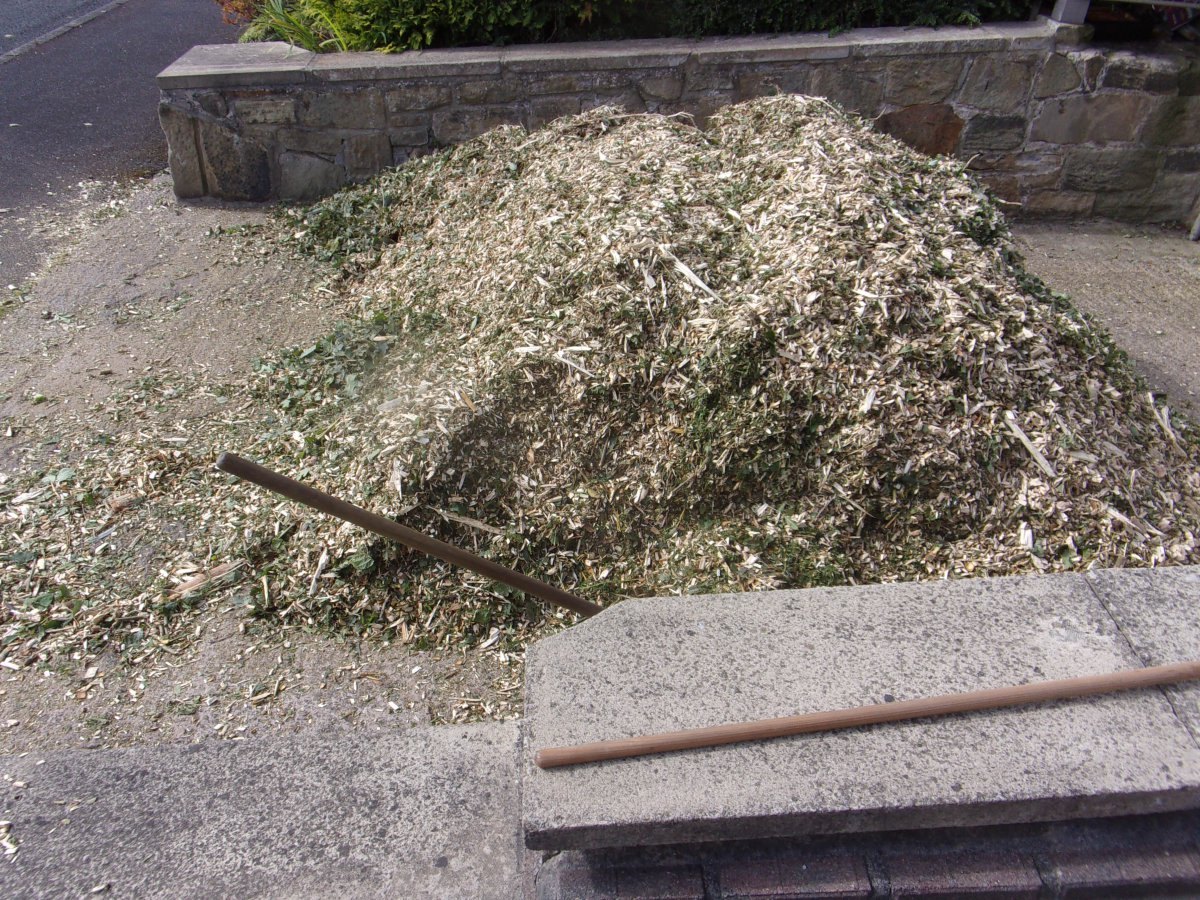 Part of the free 2 ton load dropped in our driveway; please note I used a long handled snow shovel to move these and it worked a treat. 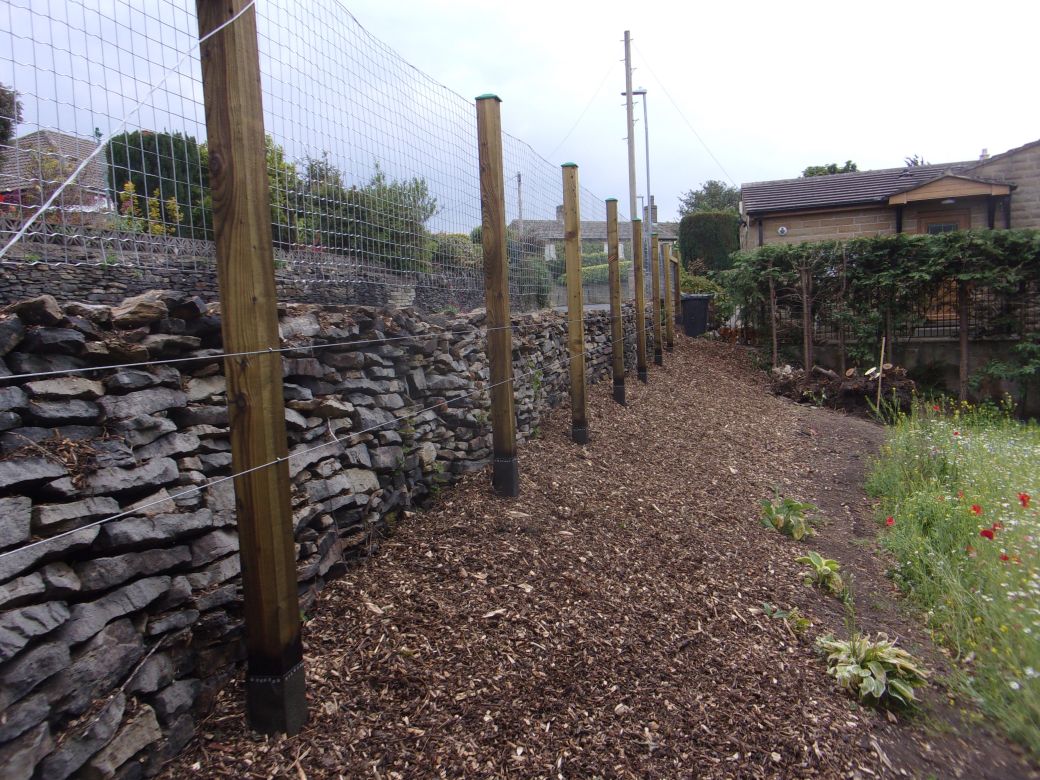 Here are some of the two loads costing £110; these were dropped in two piles at a time on the adjacent lane which saved lots of handling; our site is very steep indeed meaning standing upright is a major challenge. 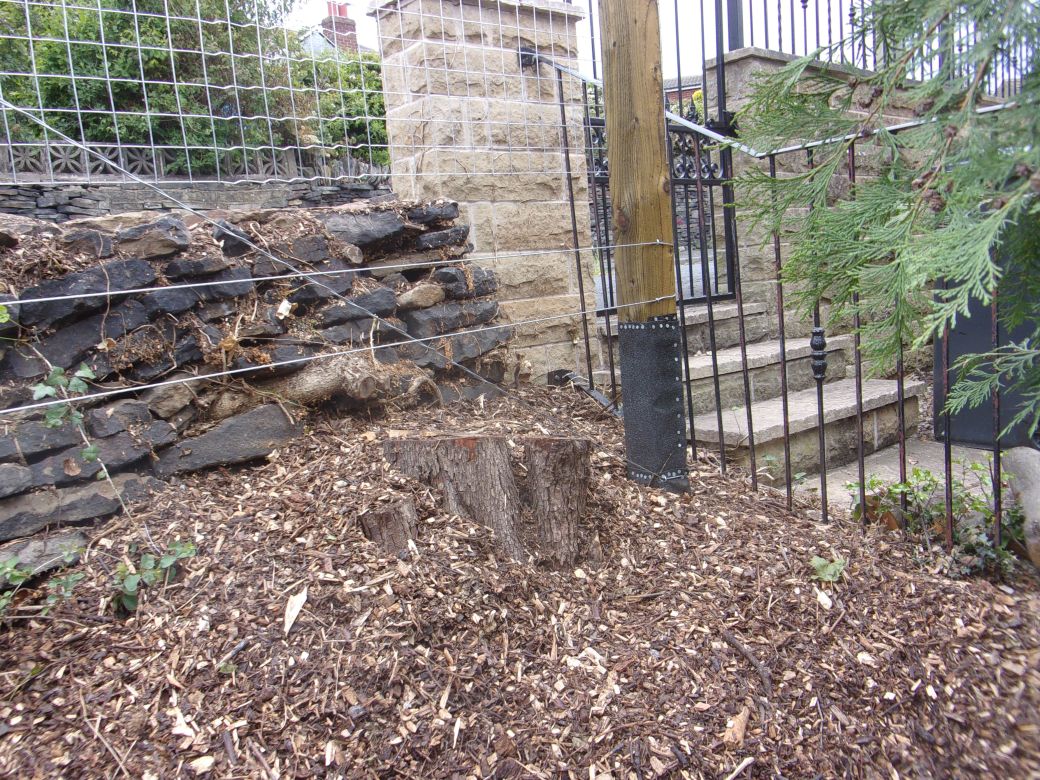 Thanks Ken; you mention hawthorn bushes in full bloom; they do indeed look wonderful but we had a huge hawthorn tree right in the top corner of our rear garden the stump can clearly be seen and it was huge but to really make me work it had a massive ivy wearing it like a huge flowering crown; I've never seen an ivy of this size and it can be judged by one of its roots protruding out of the wall; I'm still trying to kill this ivy but it won't oblige; I've yet to find an easy light job living here; it's been hard graft so far for the last 34 years and still no let up.

Later in the year I'll reduce the size of the Cerastium because otherwise its going to take over.