Don’t buy this piece of junk?!

I am a sucker for any new tool or device that comes on the market. I love tools. When I saw this router bit advertised on Instagram, I just had to have one. It is probably one of the most disappointing purchases I have ever made. My first discovery was that it comes with no documentation whatsoever. It was bubble wrapped in a plastic envelope with a Chinese mailing label. Period. No company name, no instructions, nothing. It didn’t tell you how far to put the rail guide or at what depth it was to work at. After some experimenting I found it only worked correctly on one thickness of boards. If the board was thinner or thicker it was impossible to get a matching joint. Even though this eliminated it from being used as I had wanted, I went and bought a couple of boards to practice on. I set up my guides to ensure the boards would be fed straight. By the third cut I was getting a lot of resistance. By the 4th cut the blade was shot and just burned the wood. Even though I hade the board clamped to the guide it started kicking back and ruined the cut. Rather than risk loosing an eye or finger I gave up. Don’t waste your money. 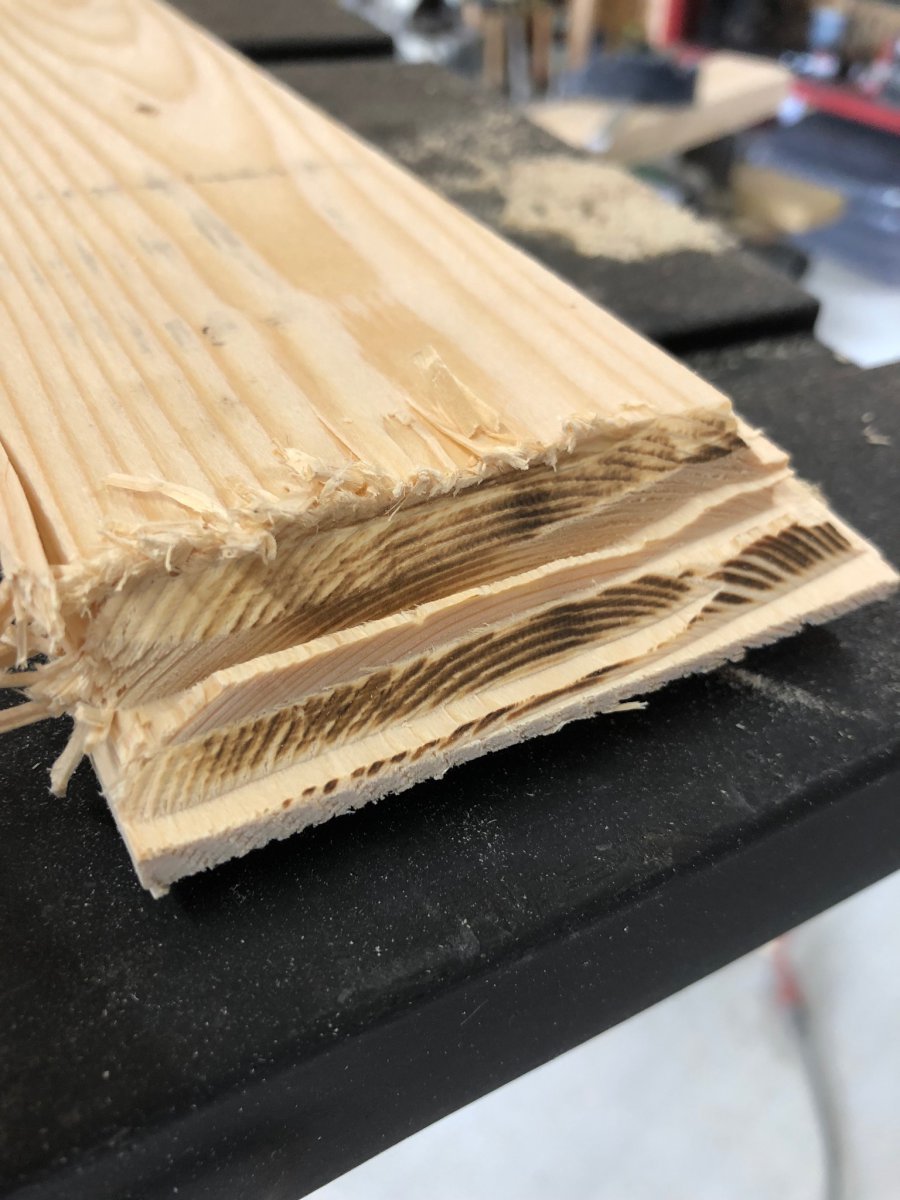 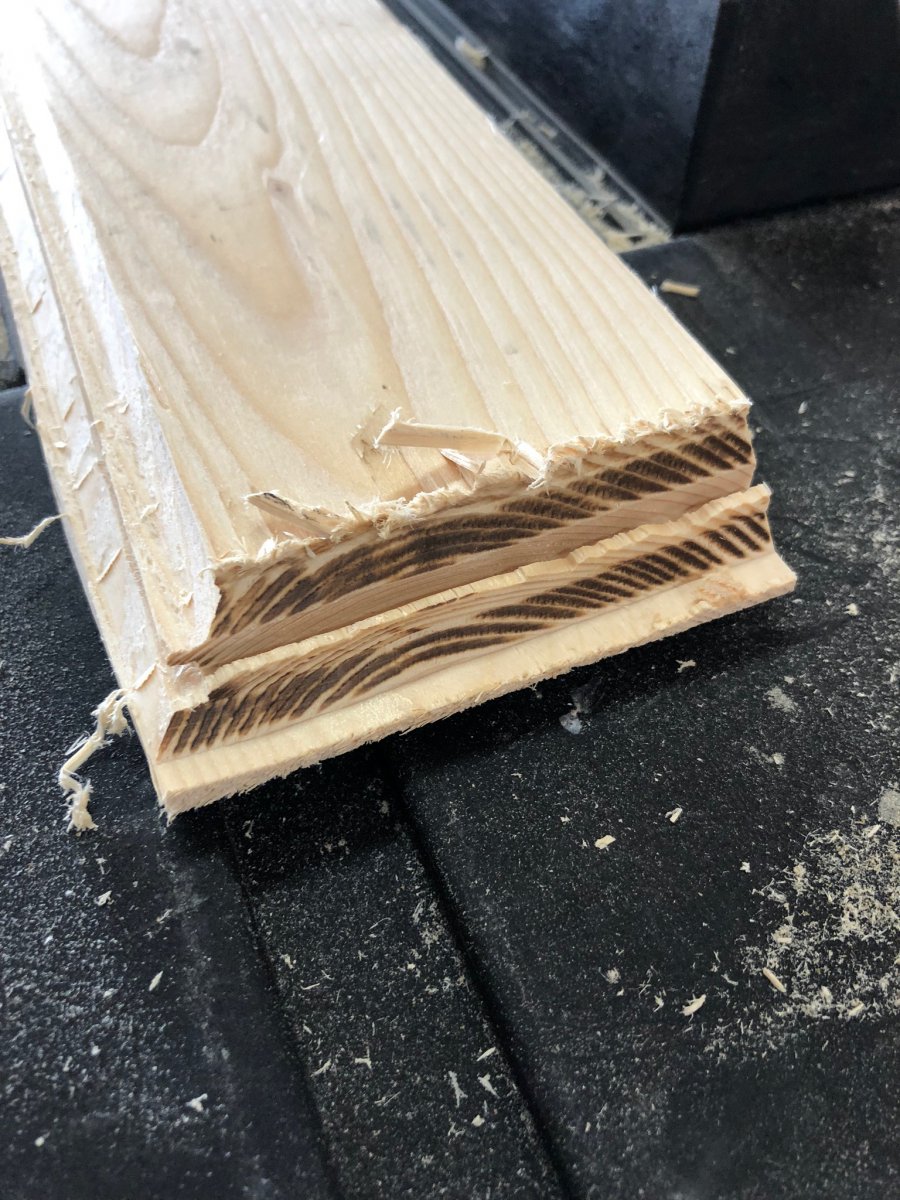 Thanks for the information Doug and what a huge disappointment for you.

Cheap router bits are usually OK for a home workshop where they are little used; your pictures though are something else; did you go full depth in one pass and at the correct feed speed with correct router speed? Your router appears to have the power required judging by the ragged cut and burning. I'm certainly not criticizing in any way; because I sympathize with you.

It's a good job you've tried it on softwood looking at the results; hardwood would aggravate the problem. The design of the bit though means there is a lot of cutting edge in contact with the wood the cutter having to work extra hard and having to remove lots of chips but if the cutter was sharp with decent rake angles it should perform better than this.

Obviously it's a tipped cutter but are the tips TC or HSS; TC (Tungsten Carbide) is very hard wearing at least decent grade is; HSS (High Speed Steel) should also perform better than shown; for years I ground my own cutters (knives) from HSS blanks for my Whitehill moulding blocks ensuring there was plenty of rake allowing the tip to cut rather than rub;

My blocks were the old fashioned highly dangerous type that were prone to throwing a knife; the block was powered by a 3 phase 3 hp motor at 6,000 rpm; I have three routers rated at 3hp and these take a good bite mostly going to full depth in one pass.

Is there an alternative method you could use Doug not requiring the use of this cutter? What are you making because I'm interested and nosy?

I like Trend router cutters; not cheap but worth the extra outlay; I also have big 1/2" straight cutters I bought for £1 each at an auto jumble that have cut a lot of moulding for me. your cutter though is a rogue and must be putting you off routing?

I needed over 300' of softwood moulding and ran my own through a home made guide the cutter was Roman Ogee set at full depth of cut; the timber was bought as planed all round at 18mm thick and both edges required moulding so this meant 600' of routing to be done. By setting up the router as shown below and having run test pieces the moulding was run without problem with the same bit that didn't need re-sharpening it being a TC bit.

Just an idea for you Doug if you've got lots of moulding to run. 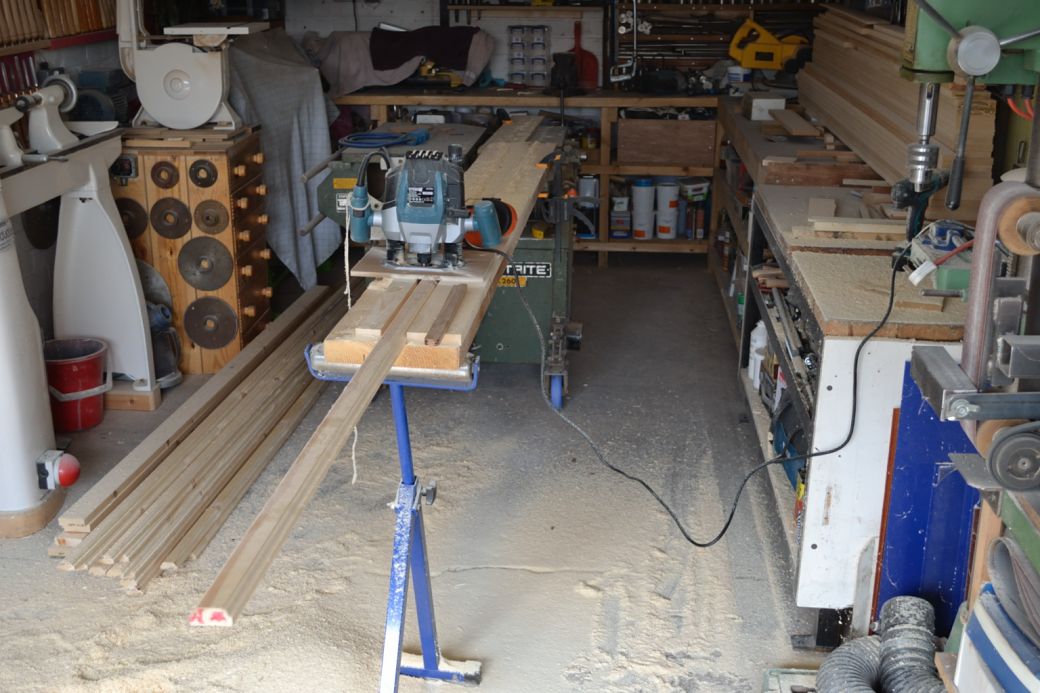 A screwfix cheap 3hp router setup to run over 600' feet of Roman Ogee moulding; the router controlled from the wall socket; setting up the router like this took a bit of time but it considerably speeded up the actual routing; long lengths of timber were fed through with ease and accuracy ensuring miter joints when cut went together snugly. Piles of MDF can be seen on the bench top these for another project and to be routed. 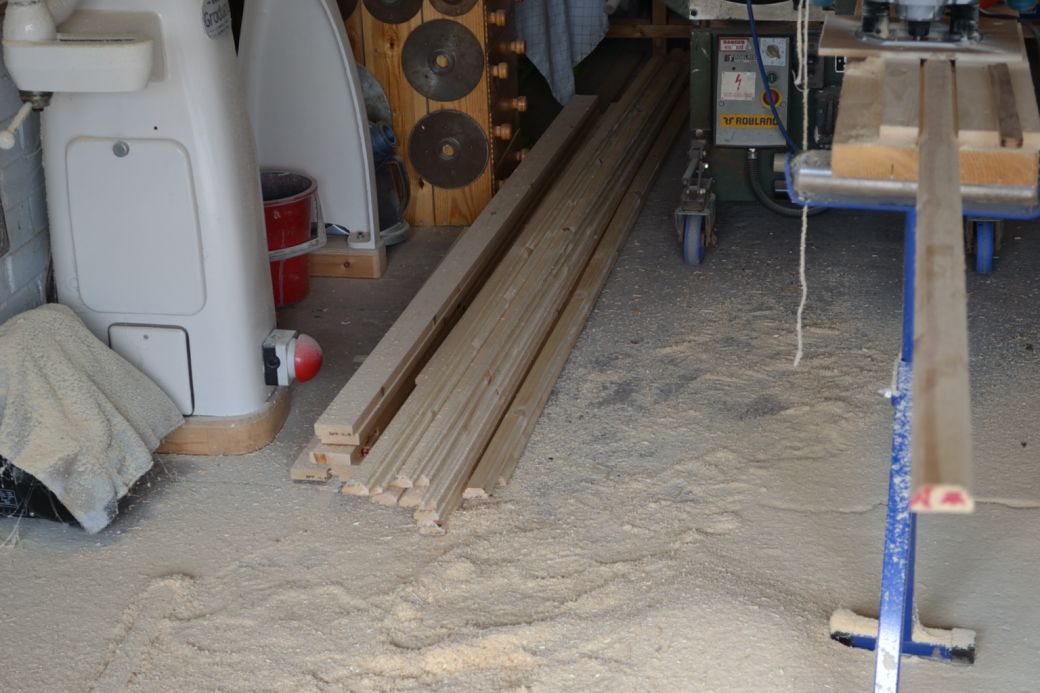 No dust extraction hence a lot of mess; safety kit was worn throughout; ear defenders and dust mask. 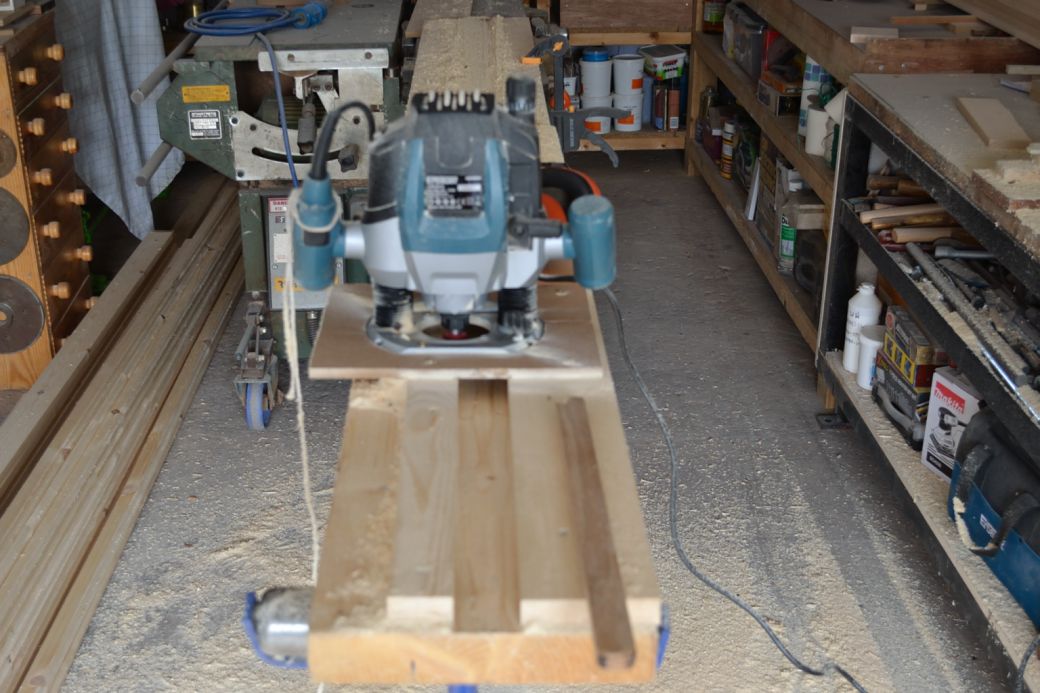 Showing the router mounted and the two side guides forming a "tunnel". The push stick is always close to hand. I needed to route 50mm and 75mm wide lengths of timber for framing and this worked so well I was disappointed not having a lot more to do; the timber was so long I had to take it outside in order to turn it around. I'm a big fan of making home made guides and jigs. Hope its of interest Doug.

Thanks Colin. I went “old school” to check the hardness of the inserts since I no longer have access to a Rockwell tester. I got out one of my good metal files and took a corner swipe on the edge. It dug in deep! If the Rockwell was up around 60 - 62 on the C scale the file should have had no effect on it. I am going back to the drawing board to research other options. This project is for rustic frames for our kitchen so it has to be unusual as well as perfect per my wife.

The cutter tips aren't carbide Doug if you can file them; as you say the file shouldn't bite at all.

Could you use biscuit joints for your frames?

Retired said:
Could you use biscuit joints for your frames?
Kind regards, Colin.
Click to expand...

That is a good thought Colin. I had also considered using using the Kreg K-4 system. It’s time for me to put my detective hat on and investigate the options.
Ad

Good luck Doug; yes there are usually options available; how sad though your router cutter didn't behave as you expected leaving you disappointed. 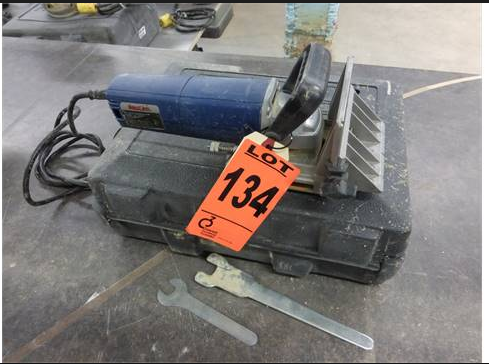 I've owned a Freud biscuit jointer similar to the one above for many years; Bron generously bought it as a Christmas present for me. At the time I was making and installing our hardwood kitchen; I had cut the mortise and tenon joints for the seven wall cupboard doors by hand all twenty eight joints taking over two days.

The seven doors for the base units now had their joints cut using the new biscuit jointer and what a revelation this was; I remember Bron saying dinner will be ready in an hour; as I knocked off for dinner all the joints had been cut and the biscuit jointer cleaned and put away; it was truly amazing; I've used this biscuit jointer many times; mostly it sits in the bench unused but when needed it's needed badly.

I've never used the Kreg system you mention Doug but these Kreg systems are very popular whilst not breaking the bank.

Here's another excellent machine; I don't own one of these and have never used one; the cost would give me nightmares;


As you know Doug there are many ways to make joints; modern technology though has moved on since the hammer and chisel days I was brought up with.