All I wanted is one.

All I wanted was one tractor for pulling in Antique tractor pulls. The rules were the tractor had to be older than 1960, Must have a PTO shaft so you could be dynoed. You were allowed so many hp per 1000 pounds.

I was pretty sure I wanted a Massey Harris tractor for this endeavor since there were not a lot of them like the belly button John Deers or Farmall M models.

So after a 6 month search I found a 1951 Massey Harris 44- 4 cylinder gasoline tractor at a John Deer dealer. It was in pretty sorry shape but the engine sounded good. PTO shaft was gone and plated over, the hubs for the rear wheels were a mess one a home made affair and the other badly cracked and welded up and the rear wheels were wrong, one a Oliver and the other a JD. 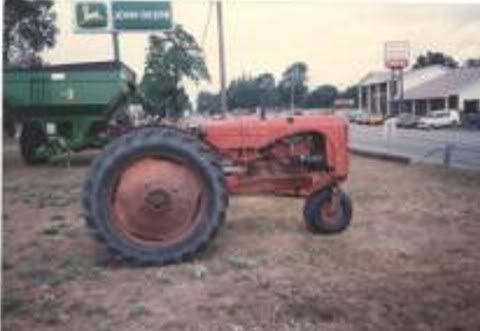 So a search for a parts tractor started, finding a parts tractor and tramping thru salvage yards to find the parts was nearly a two year ordeal. The dealer where I bought the tractor notified they had gotten a diesel 44 special on trade and it was sitting in a far corner of a shed they were cleaning out. every thing was going to auction.
They told me what they wanted for it so I went to look at it, parts I needed were there but the engine was stuck and they wanted a running tractor price so I passed. Wife said to see if I could buy it at the auction, I did buy it but it cost me a lot more than what the dealer wanted in the end.

My dad said it was really to nice to part out and I could get it running. So I had Number 2 1953 Massey 44 diesel special. A whole nuther story.

Finally after 10 Masseys in the collection ( wife said I should start collecting them.). My wife spoted a tractor parked behind a barn looked to be in pieces. We stoped at the farm on a cold windy Febuary day with about 20 inches of snow on the ground asked if it was for sale. Fellow said he had plans to fix it up some day, (don't they all) but said I could go look atit if I wanted. I waded the snow back to it and found every thing I needed.
The owner came back as I was looking at it and said his wife said to sell it. I made him an affer which he rejected so I tell him the engine was tore down and sat in the rain so the bores could not be used like that. told him I would think about it but didn't think I would take it for what he wanted. He decided to take what I offered.

Oh boy the hubs were a bugger to get off. I had used heat and made a chain plate set up with a 20 ton jack Lots of penatrating oils boughten and home made stuff I was told to try. Still wasn't coming off, called my dad for advice and he said to buy a 6 pack of coke. and pour all over the hubs where it could get down on the axels then leave it be for a few days.
Three days later I went out and slid the hubs off with my bare hands, the coke had ate the rust away.

Get all the part installed and paint it with some cheap hardware paint since it was my first time painting.
Took it to its first pull and my dad took it over. Carb was not adjusted properly but he took Second place with it. 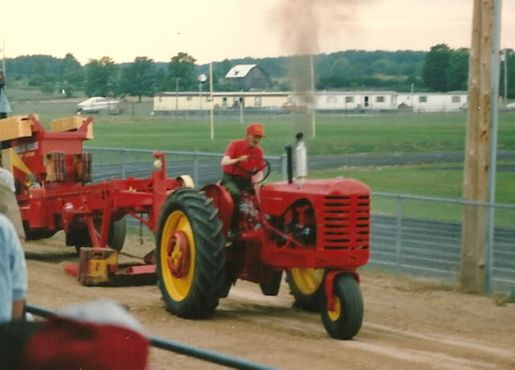